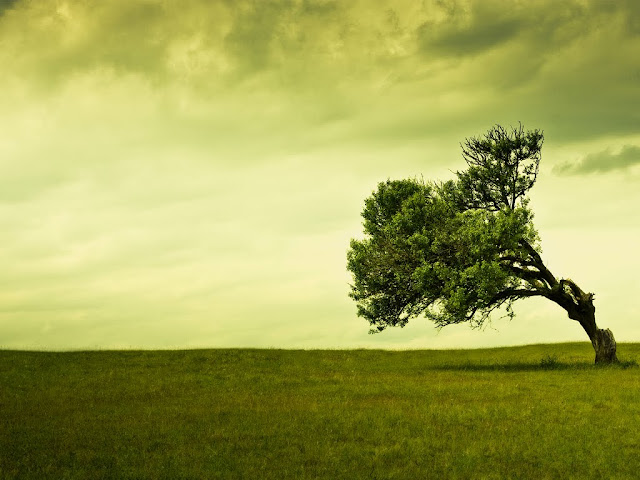 BENT!!! But not destroyed from achieving its goal!!

Had this thought today when I saw a tree; marvelled was I at its beauty, not only the beauty but it’s uniqueness also; it was a bended but growing tree!!
Ok, When the tree was to be planted, no one absolutely no one had the faintest idea that the tree would turn out to be a bent tree, except it’s species is known for being bent. At the First instance, the planter goes to the soil, took the seed and implanted it into the soil, the soil was watered daily to ensure the survival of the tree; weeks go by and months rolls by, the plant sprouted out, the farmer was happy, because his efforts were not in vain. The tree started growing, passerby could notice it’s presence in the soil as it grows, it was growing in a straight form at first, and am sure at a point in time, someone would have thought deep within that such tree is going to be a straight long tree , but it got to a point, it lost it’s erect posture and started shifting either towards the right or left, it was BENT.
Years passed by, an erect tree lost it’s form and became a bent tree, BUT its never stopped it from being referred to as a tree, though bent, straight, curve or erect, a tree is always a tree. The bent form never stopped it from performing it’s duty, it supplied shade to those who needed it, it recieves sunlight just like any other tree and performs photosynthesis; it provided food even to those who need it. It’s Forms was just Different but it does it’s work just like any other tree.
So what then makes you think that being different from others is a flaw, no it isn’t it just makes you stand out; you think you won’t and can’t fulfil destiny because of your flaws , no you can.
Every bent in life shouldn’t stop you from achieving your purpose in life, dont let what you are or what you look like diminish your life’s worth and value. You are just Different among them all. You can achieve what others can and you can do better than that. Every story in life experience a bend, but you shouldn’t be so engulfed in that, that you forget your purpose in life. Whether you have a bent form in life history or not, you have a goal to fulfil. Wake up. Bent trees still do more and yes they glow in beauty because they are different in everything among others. Be bold and love what you are and what life is building you up to be..

I do hope I passed a message across to someone, I really do hope. Feel free to comment, share and follow me. Love you all, you are the best!!!

The Global Brand for Christ, reaching the world with the saving and full gospel of Christ. Imperfect being made perfect in the savior. For without Christ, we are all nothing
Articles: 233