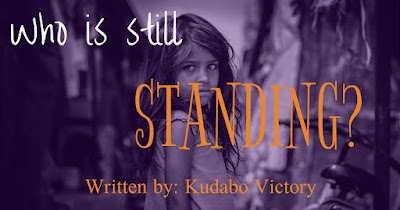 I ran home to meet mama,
With hot tears on my face,
I feared the beating I will receive,
For if she carried the “koboko” to whip me,
I know definitely the pain would be felt,
What will I tell mama?
She had warned me while holding my ears,
The hotness of her grip on my ears still remains
What will mama say?
Oh!!! am so dead

Mama, mama!! I cried,
Am sorry mama, I knelt in front of her;
Let me start begging before I talk,
For I know what I did was wrong?
She looked at me,
Her face wrinkled with tiredness,
She wiped away my tears to my surprise,
Does she know what I plan to say?

She gripped my hands and dragged me out,
Straight to baba Risi house,
What for? I wanted to ask,
But no words came out of my mouth,
She talked to baba Risi in private,
And slowly she dragged me to stand in his front,
I looked like a lamb ready for slaughter.

Baba Risi was know for his herbs,
A native doctor with so much fame,
I was neither sick or ill,
Why must I be here?
Do it baba Risi, I heard my mama say,
Do what? I reply
Mama landed me a slap,
I warned you didn’t I? She replied

I looked unhappy,
Should I cry or not?
Did mama know?
Did she know I was pregnant for Bode, the palm wine tapper’s son?
It wasn’t my fault,
I once saw mam sleeping with baba Jide while papa was away,
So I decided to give it a try,
But I ended up here.

Mama has always told me to stand,
Stand for the truth even when others don’t
Abortion is evil, she says
But why must I do that?
She claim she can’t bear the shame,
All I said were mere words to you then; she said,
Mama was my example,
But here I stood confused.

I had felt the symptoms of pregnancy before the test,
But mama’s word to stand for what’s right kept me going,
Though I wished I wasn’t pregnant,
But when it happened,
I had to face my fear,
But here stood mama
The same mama who told me to stand,
What was happening?
I felt shattered
Is there still no one standing?

Is there anyone still standing for the truth?

Is there anyone holding on to the banner of truth?

Am I willing to stand for the truth?

Not by mere words that we stand but by our actions…

At some point in time in our life, we are examples that others want to follow, don’t end up to be a disappointment to them

Not only the truth, but what else have you claimed that you can stand for but you aren’t… Who is still standing for something even when others are not?

Your doing that others see even when you aren’t aware, make sure it is that which is good… don’t cause problem for others..

From the desk of a writer,
Kudabo Victory 2017