The devil in you that you thought was stopped can never be stopped until you are completely free. Had I been patient that faithful day, this wouldn’t have happened.

That saying worked perfectly for me. I got to Herienatta’s place and saw her crying , I was moved to ask her what was wrong, but all she could mumble was “ Am Sorry” ; yes she deserved to be sorry.

“ Why didn’t you tell me the truth?” I asked in annoyance remembering the strange call I received.

Herienatta was a mother of three kids for different men, she was young and beautiful that one couldn’t believe that. The first child she had was for a lawyer in his early 40’s, the second was for a professor in his 60’s. The last child was for the person who called him.
“ That’s what I do, that’s how I make my living, but when I met you, I wanted to change for you. I loved you unlike others have met, I was ready to tell you the truth that faithful night at Abuja but I couldn’t bring up myself to do that, I was scared of you returning back to your old self” she said crying profusely.

The devil in me couldn’t be tamed, even though I was in the presence of the one woman in the world who had control over me, her voice made no sense to me again as I stormed into her kitchen and came out with a knife, she pleaded with me with tears begging me to kill her if that would make me calm down. I hated to see her cry but I was angry at the fact that she wasn’t who I thought she was.

“ Martins, even if I were to die, I want to die in your hands beside you” she pleaded rubbing her palm together in action and crying.
She was trying to pass a message to me but I was so annoyed to noticed, not until I heard her scream
“ Watch Out” before I knew it, we weren’t alone in her house as I turned back to look at the figure behind me, I heard her scream “NO” in bitterness of heart and that was the last thing I heard as I saw blood gushed out of her bowel. She was stabbed from behind and I was hit on the head with a gun .

The sound of the police siren woke me up out of my unconsciousness. I found myself in a moving car handcuffed and accompanied by two police officer who sat beside me in the vehicle. That was all I knew, I never knew her who killed her, I was told that all the men she had children for were dead that same night. Killed mysteriously and all evidences were pointing at me, I was the only one she saw last before her death.

I was told that they recurred a knife from my hand stained with blood and fingerprints indicating that I stabbed Herienatta to death five times. Since, I had personality disorder, they concluded I was the killer.

How did that happen?
The figure behind that fateful night was also killed and he turned out to be the father of the third child. I was just the perfect scapegoat. I wasn’t even given a chance to explain, they had witnesses so they told me, my case was finalized.
All was like a perfect laid down plan, with me being the ultimate weapon. I sat down in the Prison mourning the death of Herienatta, staying in the cell for days, I heard nothing from my family and gradually I was becoming mad.  But something must be done, how would I be free?

Did you miss the First Part, you can read it up HERE 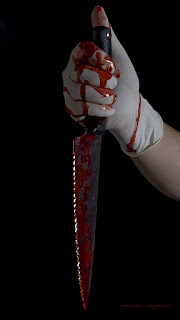