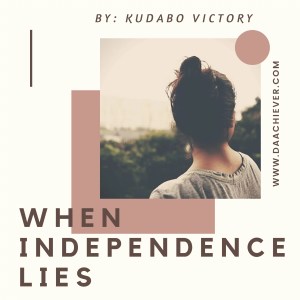 Kate always looked calm and collected, which is what made her confession to be more shocking. After months of giving off the impression that everything was fine to her, she finally admitted to being plagued with thoughts of self-destruction and depression. She did not want to admit those thoughts to anyone. Yet holding them in was becoming toxic for her, destructive from the inside out.

On a blessed Monday, she told me right after the brief meeting held in the church. I joined her in prayers because I know just how destructive those thoughts that flow through her mind could be. After saying “Amen,” I told her to promise me to never seat alone in the dark, talk with few members of the church and mingle around. At first, she resisted and I could see it in her eyes, she didn’t want to be seen as a person “in need”.

Her words were, “I’ve always fought the battles within on my own. I don’t want to depend on others and I have to prove to them that I’m strong “. I smiled at her, she was actually believing a lie that she needs not depend on anyone but I simply told her, “All of us are needy, I am needy also and none of us on earth can live the life God has called us to on our own. We just need to admit this and be amazed by the help God gives us through the Spirit and through his people”.

My word seems to sink in for I felt her relaxed, that afternoon before few of the members left the church, Kate told three people in the church, who thankfully showed great compassion and care, they didn’t realize she was going through a lot and with little hugs here and there they could offer her, Kate smiled widely in months.

****
I hate admitting my areas of vulnerability, so I try to cover them up, play around with them or even minimize them in order to appear for others that I am having it all together. When asked how I am doing, my general response was this: “I’m fine, good, great… ”

Never had I responded with the word: “I’m vulnerable, I need help, please pray for me… ”

Rarely, not one I can remember.

I realized the easiest lie to believe is the lie that says we don’t need help, it kills when you’re filled with this thoughts, I can handle things on my own when you know in the long run you’ve been handling it on your own and it isn’t working out, when we’re “captain of our souls” and we need no one to watch the coast ahead us from behind. The mindset of independence lies beneath the surface of many of our decisions and so many areas of our lives that we must give careful thought. Though independence might appear to look like freedom but one way or the other, independence keeps us from being free. The truth is that we are all in great need, and though we may at times be unwilling to admit it, we are still vulnerable.

Vulnerability is not our enemy but it is our opportunity. The only areas of weakness that will keep us from growth are the ones we won’t admit or we fail to admit.

****
Walking alone especially as regards running the Christian race is not wisdom, because when you fall or is about to fall; no one will be there to help you up. When Independence lies is when we believe that vulnerability, our weakness is an obstacle and not an opportunity to grow.

****
Some of the words in this article were culled from the book ‘The Truth About Lies’ by TIM CHADDICK.