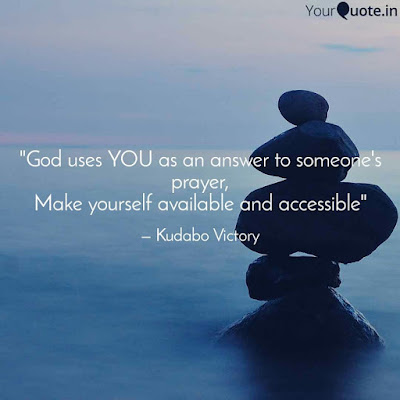 On bended knees, Rose prayed with tears filling her face.

When will you answer me?

Charles had been a graduate for about ten years now and all effort to get a good job proved abortive, he had once thought of killing himself since there was no meaning to life.
Standing by the edge of the river, he thought about his life and how he had lived, it had no meaning. Death was the way out he thought not until someone called him from afar

Mercy had been suffering from poverty ever since her parents died , they left her no riches before dying since they also lived a wretched life, but here she was making a last attempt towards her interview to secure a #10million job but something was hindering her from being selected until she saw someone

How available are you?

YOU are an answer to someone’s prayer.

So see yourself valuable

A child is an answer to waiting parents

You can be an answer to someone who needed encouragement, motivation, money, healthcare, help, promotion and the likes.

Make yourself available and accessible because God is also preparing others as an answer to your own prayers also.

Also your testimonies are motivations for others to move on and never lose hope. Share them.

Be an answer to someone’s prayer. See the usefulness and value in you.

Be an answer not an hindrance.

Give out without reason,

Be an answer to someone’s prayer; you might not know you are but be readily available at all times to be an help.